The third part in this series focuses on the ‘fun’ bit… the plant installation! As the plants were slowly accumulating in the hall of my apartment, huddling together in groups alongside a growing tower of pots and trays and compost, I realised I’d need to transport everything in a van. I did have photos of this part, however my phone got wiped and I’ve lost these images. So to paint a picture, everything was squished in my friends little van and one sunny Saturday morning we took everything to Newton House. The photographs below show the room part of the way through unloading the plants.

One of the trickier aspects of the installation was potting and watering in the space, whilst trying to keep things relatively mess free for visitors to come and see what I was up to. I’m quite used to potting inside my apartment as I have very little outside space, so I managed pretty well considering there were some quite large plants to pot. Water spillages dried relatively quickly on the beautiful stone tiles under the glass roof. 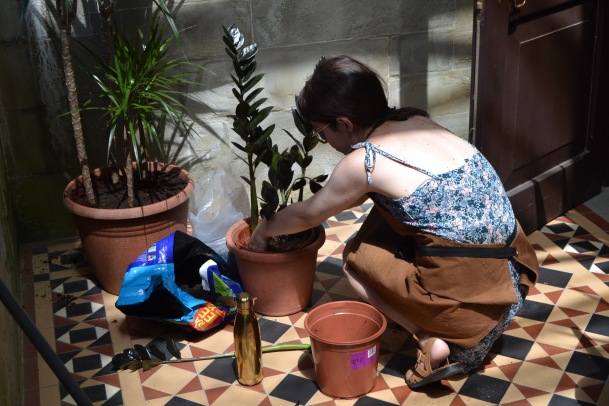 As the day wore on, the heat was stifling as the sun moved around to the conservatory in the afternoon. It was then I discovered that the windows had to remain fully closed as they were in need of repairs, which due to their listed status, was not a straightforward endeavour. This slight problem, coupled with the glass roof, got me really thinking about leaf scorching and what I might need to do to prevent this as much as possible. I must add that this was during the UK heatwave, so were not typical conditions! 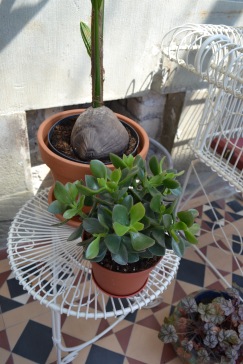 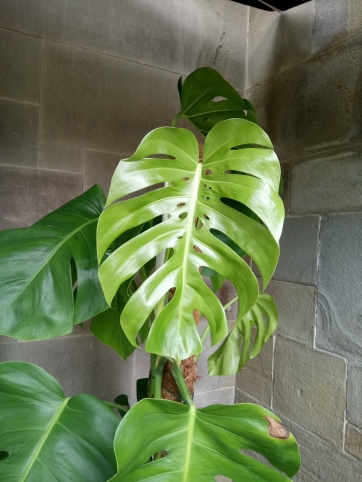 The biggest plants I needed to pot were the dracaena marginata duo I planted together for a corner feature and the monstera pertusum. Perhaps one of the most challenging points was during the process of mixing a full watering can with my compressed coco coir, to find that the bag had a leak and was spreading all over the floor! The most difficult part was definitely the heavy lifting – some of the pots we filled with gravel to act as ‘stands’ to create height, which as you can imagine, were incredibly heavy.  I always think it’s good to share the more difficult moments of projects like this, alongside the more enjoyable aspects. 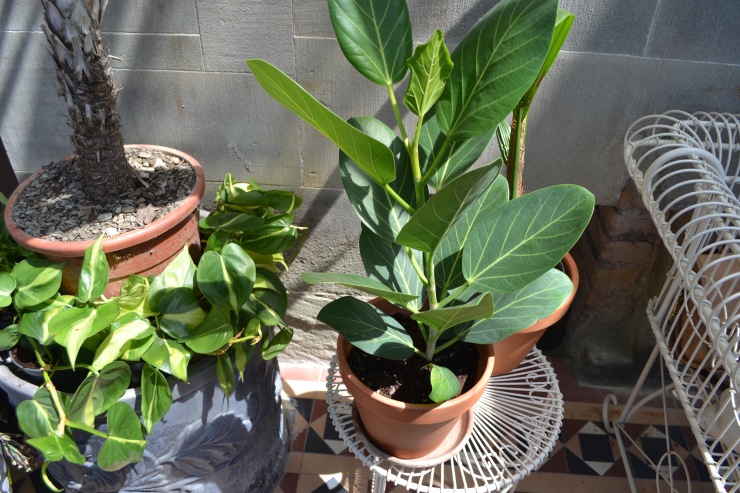 I used the gravel pots as stands which allowed me to create tiers to plant onto – I particularly like the palm surrounded by philodendron brasil (above). Visitors (particularly children) were really taken by the cocos nucifera (coconut palm). Whilst planting, a school group of Spanish schoolchildren turned up and were really enjoying watching the process unfold! They went for a packed lunch and came back later to see how I was getting on.

To echo to classical uniformity of the garden outside the conservatory, I wanted to play with symmetry indoors by having a row of plants underneath the windows (above). Centred by a spectacular ZZ raven were two Alocasia and two Sanseveria, all of which draw the eye along the space and point ‘up’ towards the windows. Here I chose plants that were sculptural in their form and eye catching to create interest for the visitors. The Victorians loved tropical plants and a feeling of the exotic, so I thought these plants would create that atmosphere here too. A lot of people came onto me to ask about the Alocasia Amazonica, which very few had seen before!

As you might notice from the photo above right, a few days after the initial planting and installation, the unrelenting heat was causing some problems. At this point, I took the philodendron brasil plants back home until the weather cooled down as these have a real tendency to scorch. The monstera was also really struggling under the glare of the glass roof and so the only thing I could really do was to go and get it a parasol! I found this flat backed one which was quite inoffensive and added some humour to the space, whilst also carrying out the important task of protecting the monstera. Just as Victorian ladies might have sat under a canopy, so too was the prized monstera in the corner!

This was ‘phase one’ of the installation, the following week I returned to bring the smaller plants and some other surprises too…

Hope you enjoyed this post about the plant installation of this styling project. In the next post, which will be the final part of this mini series, I will conclude with some reflections and share some more details about the National Trust’s 2018 project ‘the power of women’, for which I made an installation piece in the conservatory as part of a wider project.