Care + repotting of senecio rowleyanus; aka string of pearls

I love witnessing the ebbs and flows in plant popularity, both in the shop and on instagram too. I can usually tell when a plant has got a lot of hype around it, or if it has ‘hit the mainstream’ when my non-planty friends (yes have tried to convert them, but no it hasn’t worked yet…) try to describe to me a plant they’ve heard about.

Today’s plant is the biggest culprit of all in that respect; you know, ‘the plant that has lots of bobbles on it‘ ‘the plant that looks like peas!‘ ‘so-and-so bought a fake, sorry ‘faux’ one of these in Marks & Spencer the other day‘…all ways I have had people describe to me Senecio rowleyanus: otherwise known as string of pearls, or string of beads! A brief note on this, in the UK at least, string of beads is more commonly used to refer to the closely related ‘string of bananas’; Senecio herreianus. This has a slightly elongated oval, almost teardrop shape as opposed to these almost perfectly spherical pearls. Last year we recieved these on a delivery instead of a string of pearls by accident and let me just say, they were nowhere near as popular as their rounded relative! 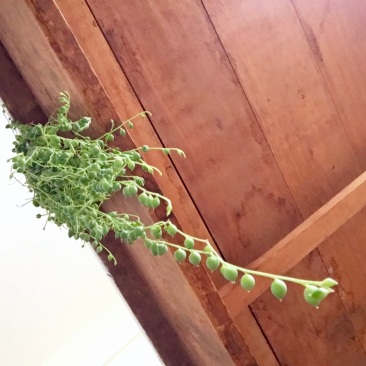 Caring for these string of pearls can feel like quite a learning curve if you are new to houseplants, particularly succulents. As with all plants, the main issues are light and watering… this plant needs lots of the former, and (relatively) little of the latter. The main reason these plants don’t survive is overwatering. I water mine once every 2-3 weeks-ish in the growing season and lightly once a month during winter. I water deep into the pot until water runs out the bottom and during winter I often water on a plate from below.

I just need to come out and say that I killed my first plant by not giving it enough light… I was adamant that it was going to hang in my living room off my curtain pole, but this west facing room did not have nearly enough light for my pearls! Coupled with the fact that it was hanging quite high up, it all ended rather badly. I waited until the following Spring and tried again. These negative experiences can really teach us so much; that phrase about learning from your mistakes really does apply when it comes to plants I think.

It’s worth noting that generally it can be a slow growing plant unless you have some warm temperatures and bright light (it’s native to South Africa). The best I can do is right on the corner of my office desk in my south facing bay window, and I am pleased to report it has been growing quite nicely (see progress photos below!). In the winter I use a grow light.

I had been putting off repotting mine for a very long time, as I know the roots are fairly fine and don’t like a lot of disruption. In my head the whole pot would fall apart and it would be a complete disaster…but I knew I had to do it as the pot was drying out extremely quickly and growth had slowed a bit.

One of my favourite things about photographing my plants regularly is to see how they have grown over time… the grid below shows the growth of my String of pearls since February 2018:

When I came to take the plant out of the pot, I was pleasantly surprised by how well the roots held their shape. I think this is why it’s good to wait until the senecio really needs repotting; if the roots were a lot less developed they would have been less sturdy to work with. I have put up some video footage of the process on my instagram stories highlights under ‘Plant CareV’ to coincide with this post. As you can see in the photos below, I had a pot ready and lined at the base with my potting mix of coco coir, cacti and succulent compost and perlite. When I’m potting I tend to use an old mixing bowl and make up the quantity fresh, as I need it — I can then tailor it to the plants I am potting depending on their requirements.

I loosened up the rootball and placed into position, sitting the plant slightly off centre, towards one edge of the pot so that it could trail over the side easily. I filled in around the plant and gave it a thorough watering. Don’t be tempted to jump up in pot sizes; just up one size will suffice as they like to be fairly restricted to grow into their new pot well. FYI, my pot looks a bit bigger here but as it was in a square tall nursery pot, this was the best suited in terms of size.

Here it is below after repotting! I have it in a terracotta cache pot for now which is nice and heavy so will stop the pot getting knocked over, I quite like the colour combination of the green and earthy tones too: 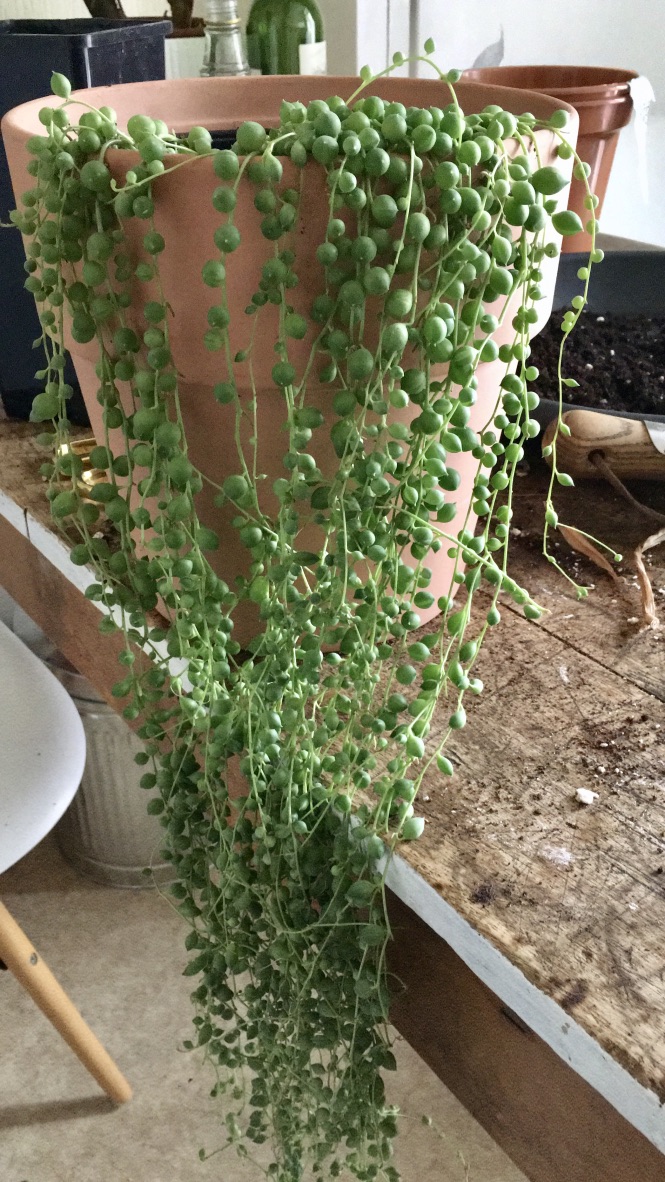 I just wanted to add that I repotted my senecio in the growing season and would recommend waiting until then to do so, unless your plant is badly suffering from being unhappily root bound. It just took me a while to put this blog post live; I did this over the Summer but didn’t want to wait until next Spring to post. I know I have readers all over the world (in 134 countries actually… I checked the other day — how cool is that?!), so it’s nice to know it’s not cold and grey everywhere! So if you have a string of pearls, I hope this has helped give you some confidence to re-pot yours if it needs it.

One thought on “Care + repotting of senecio rowleyanus; aka string of pearls”