The other night I re-watched one of my favourite films; LEON by Luc Besson from 1994. It’s about a hitman played by the utterly cool Jean Reno and where Natalie Portman made her acting debut at the age of 13. You’re probably thinking for a minute that you’ve stumbled across the wrong website, but hang on, there is a reason for this post on a houseplant blog! Throughout the film, Leon nurtures a plant that he refers to as his best friend. This plant is an aglaonema, and since first seeing it in the film a few years ago, I made it my mission to get myself a ‘Leon plant‘. 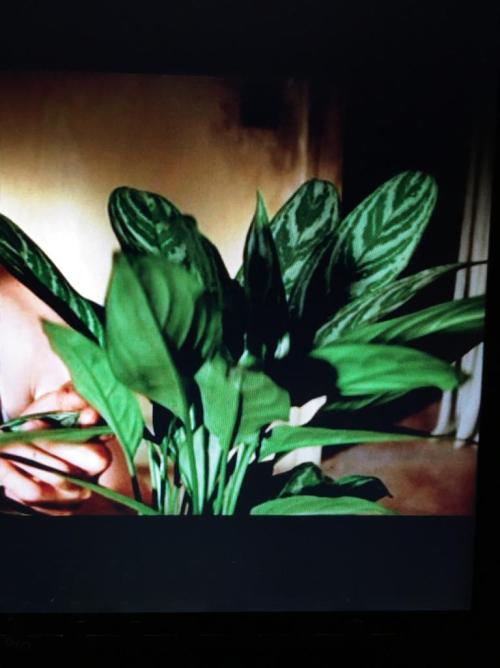 I have since acquired two Aglaonemas (aka Chinese evergreen), which are similar but not exactly the same as Leon’s. I’m not entirely sure which exact variety is in the film, as there are quite subtle patterning differences between the types. My best guess at the moment is A. commutatum ‘treubii’ but if you know this genus well please let me know! I read an interesting paper about the variety of cultivars from the University of Florida, have a read here if you are interested in that kind of thing.

Despite being quite a humble, ‘classic’ plant, there is a variety that the ‘insta-folk’ go crazy for; the A. pictum tricolour which is pretty impossible to get hold of (in the UK at least!) It’s camouflage patterned foliage is extremely distinctive, but for now I just look at my dieffenbachia ‘reflector’ and pretend it’s foliage is vaguely similar (it’s not… but nevermind) 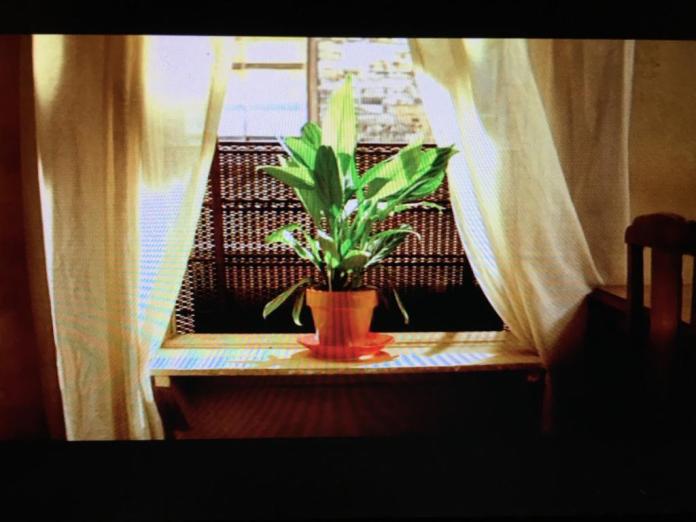 Here are my two plants; on the left is A. crispum ‘maria’ and on the right is A. commutatum ‘silver evergreen’: 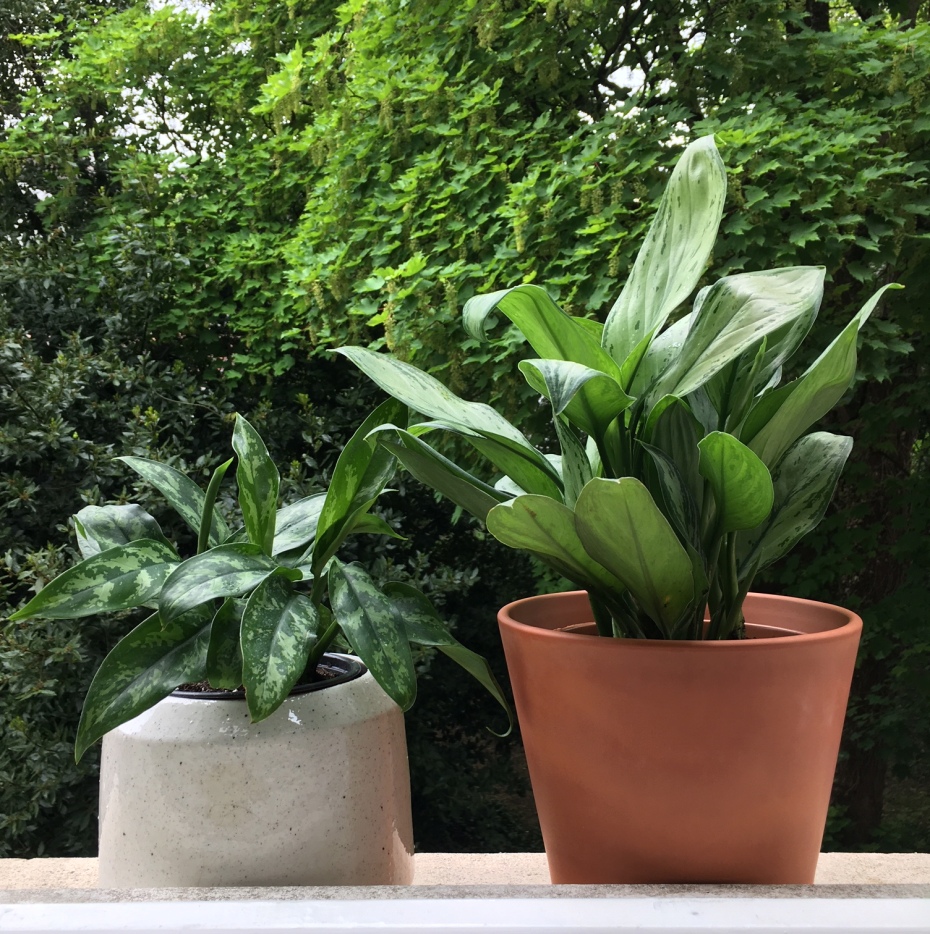 Perhaps this plant has been used as a play on the eponymous title character Leon in that the pronunciation of Aglaonema when written out phonetically is Ag-LEON-ema. As a plant lover, I must take a moment to point out some plant care issues that occur in the film. Of course, this plant is being used as a metaphor for Leon himself; he reflects on his similarity with the plant in that he ‘has no roots’ (as in planted in the ground), a transient being with no fixed abode. But as such, the way the plant is used in the film is problematic in terms of the plants actual care requirements, which I will address now.

Light – These plants are well loved due to their ability to cope with lower light levels. Though if you like things full and fast growing, their sloooowwww growth habit can be frustrating (and exacerbated if the plant is placed somewhere dark!) Aglaonema responds really well to fluorescent lighting so is great for office environments. If the conditions are too bright, their foliage has a tendency to scorch and this can also give rise to pest issues…

Pests – Something to watch out for with Aglaonema are mealy bugs, particularly around the base of the plant. This part of the plant can be quite dense so check regularly, particularly at soil level. This can be an issue if the conditions are too bright and too dry. With this in mind, red spider mite can also be a problem in these conditions.

Watering – At present I find a moderate watering weekly is working well for my plant, which sits in a west facing window. I like to water thoroughly and wait for the top inch of the potting medium to dry out before watering again. Aerate the soil when watering. I spray the leaves to keep them free from dust and looking their best!

Propagation – By division. When repotting, split the plant at the base. My ‘maria’ variety I got in this way from a botanical garden and has grown really well over the last few months.

Alt-J also wrote a song based on a famous line in the movie; ‘this is for Matilda’ (they used the English spelling of her name as opposed to the French spelling in the film). If you have seen the film, listen to the lyrics of the song and you’ll recognise the references! Have a listen here 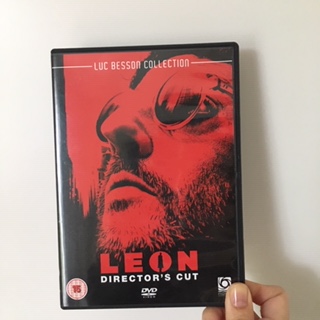 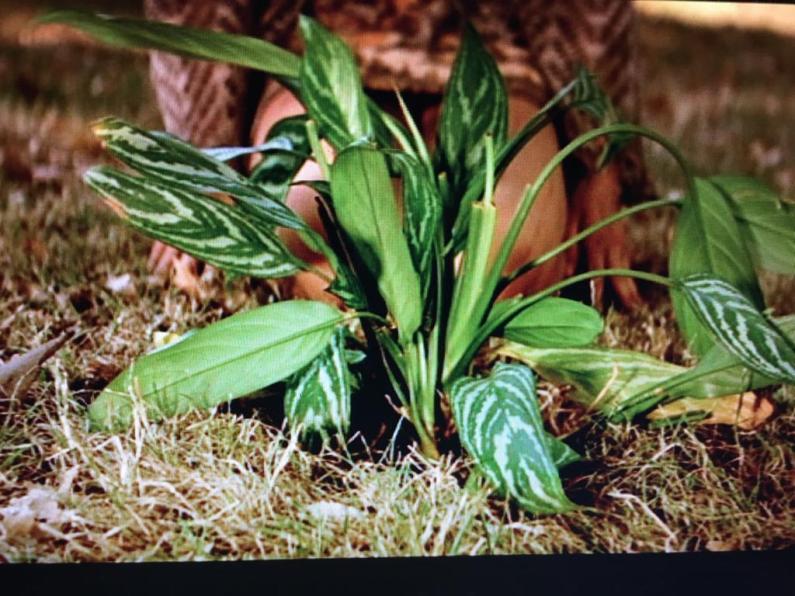 Something a bit different for today… I don’t think it’s just me who obsessively looks out for plants in shows and films (and often pauses them and photographs them…maybe that is just me). When I started watching Mad Men a few years ago I was completely captivated by the office plants in Don Drapers office! If you have any good plants in films references please do send them my way!

Below left: a scene from the film / below right, my ‘Leon plant’ photographed on my window ledge in homage to the film.

Next on my Aglaonema to buy list is one of the red varieties…if you are in the UK and have seen these anywhere please let me know!